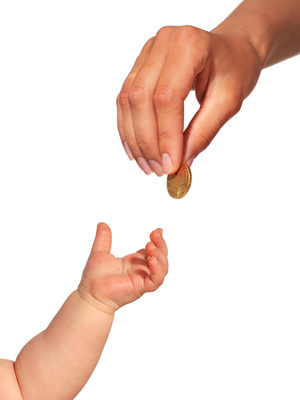 Child support is based on the policy that both parents are individually obligated to financially support their children.

Child support is based on the policy that both parents are obliged to financially support their children, even when the children are not living with both parents. Child support refers to the financial support of children and not other forms of support, such as emotional support, physical care, or spiritual support.

When children live with both parents, courts rarely, if ever direct the parents how to provide financial support for their children. However, when the parents are not together, courts often order one parent to pay the other an amount set as financial support of the child. In such situations, one parent (the "obligee") receives child support, and the other parent (the "obligor") is ordered to pay child support. The amount of child support may be set on a case-by-case basis or by a formula estimating the amount thought that parents should pay to financially support their children.

Child support paid by a non-custodial parent or obligor, does not absolve the obligor of the responsibility for costs associated with their child staying with the obligor in their home during visitation. For example, if an obligor pays child support to an obligee, this does not mean that the obligee is responsible for food, shelter, furniture, toiletries, clothes, toys or games, or any of the other child expenses directly associated with the child staying with the non-custodial parent or obligor.

In most jurisdictions there is no need for the parents to be married, and only paternity and/or maternity (filiation) need to be demonstrated for a child support obligation to be found by a competent court. Child support may also operate through the principle of estoppel where a de facto parent that is in loco parentis for a sufficient time to establish a permanent parental relationship with the child or children.

More in this category: « Adoption Child Custody »
back to top