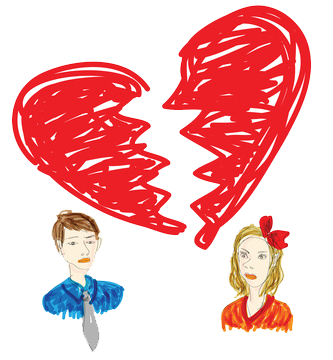 Divorce can be a difficult situation for anyone to face, and it can be especially challenging for children, who perhaps do not understand why their parents are getting divorced, or are confused about their own role in their parents' marriage. Talking with children about divorce is an essential step toward helping them accept the situation, but it can be difficult for many parents to do. Oftentimes, parents put off talking to their kids about their divorce because they are unsure how to approach the topic, but this delay can make a divorce even more difficult for a child or children to move past.

When kids are suddenly facing the divorce of their parents, they may feel like the divorce is their fault, or they could become angry and begin acting out. Such a situation can make a divorce even more difficult to process for both spouses, but talking to your kids strategically and effectively might prevent any confusion or anger.

Strategies for Talking to Your Kids

While talking to your children about your divorce may not seem appealing or may seem beyond your capabilities, just remember that a lot of people have to go through this process and there are ways to make it easier on both yourself and your kids. Some strategies for making this process easier include the following:

ñ  Carefully explain the reasons for the divorce, as appropriate

ñ  Maintain eye contact and a calm voice and demeanor

ñ  Avoid blaming your spouse for anything, and stay positive

ñ  Allow plenty of time for kids to ask questions

Each of these strategies can make talking with your kids about your divorce easier, not just for your children, but for you as well. While you may not implement all of these strategies, you can decide which will work best for your situation and use them at your discretion. If you feel like you need additional advice for talking to your children, you may want to consider talking to a divorce lawyer, as these professionals have the experience necessary to advise families in a variety of situations. Remember, every family is different, so talking about your divorce with your kids will be a different experience for you than it would be for someone else.

I recently came across an article in the internet by Samantha Change, the Executive Editor of theimproper.com. The article discussed the financial hardship that women in particular have as a result of divorce. One of the things that Samantha emphasizes is the importance of women being involved with and informed about the financial affairs of the family. In representing women in Mobile and Baldwin County Alabama where I practice, I too have noticed that often the wives do not know a lot about the financial situation of the family. This is not always the case. But, I do see it quite a bit in my divorce practice.

The main thrust of Samantha’s article is for women to be involved and educated about the money and financial issues in the marriage. Some of the other points she makes are summarized below. Here is a link to the entire article.

According to recent statistics, U.S. divorce rates have decreased in recent years after a peak in the 1970s, but still remain fairly high. In addition to being an emotional breakup, divorce can bring about serious financial issues that can have long-term consequences on the economic stability of a woman.

According to recent studies, a woman’s standard of living decreases at least 30 percent after divorce, which means getting a grip on finances both during and after divorce is crucial for surviving intact.

Don’t Bury Your Head in the Sand

All women-especially divorcées-need to overcome their aversion to money issues, educate themselves and set financial goals. Part of the reason why divorce hits women so hard financially is due to most of them being reliant on their husbands to take care of household financials while married and then becoming shell-shocked having to manage their own situation on their own.
Self-sufficiency is crucial, and these tips can help.

According to investment advisor Lisa Fox, women often have no idea what they have financially. She says that during an after a divorce, they should be aware of all investments and read each financial statement, investigating anything they are unsure of. Fox also suggests keeping track of finances by copying all important documents.

Knowing what you have puts you in a better position for negotiation during divorce.

Draw up a post-divorce budget while in negotiations in order to provide yourself with a snapshot of the type of settlement you’ll need, keeping in mind that downsizing may be required for your lifestyle after divorce.

Money: Not Just a Man’s Issue

Because women tend to live longer, earn less money during their lifetimes, and not be prone to investing, they have different financial needs than men. This makes getting a handle on financial issues is important, and should be done so sooner than later.

Divorce is never easy, but through common sense and financial responsibility, making the transition can be made easier.

Jim has attained a Peer Review Ranking of AV from Martindale-Hubbell® - The highest an attorney can be ranked by his peers.

He continues to lecture to attorneys across the state regarding family law issues.